We completed our perambulations of every cul-de-sac in Chatswood last week, prior to level 4 lockdown being lifted.

There were a number of culs-de-sac to take into account so we hastened to Porritt Ave in order to partake of them in a timeous fashion. Aside from this, it was becoming evident that my fellow pedestrians were tiring of lockdown restrictions, and as a consequence were blithely wombling into my path with a bubble popping insouciance that set my teeth a-grinding. I felt the urge to put this pointless endeavour to bed quickly, lest I become infected by a huffing jogger, or an out-of-control toddler on a scooter.

Regretfully, three of the remaining culs-de-sac barely rate a mention. I will say that the view from the top of Blundell is astonishing, if you are an enthusiast for icons of Auckland. Laid out before you in an ocular banquet are the Chelsea Sugarworks in faded pink, with the empty Harbour Bridge directly behind, and the Sky Tower following up the rear, clear and sharp in the smogless skies. Blundell is also distinguished by having a house on the corner of the cul-de-sac that styles itself ‘Chatswood House’. Peering down at the ground, for I had forgotten to wear my glasses again, I saw the owners had placed hand written laminated notices at regular intervals, advising strollers to not walk on the grass. These were held down with small rocks. Presumably the owners tire of blithe womblers trampling the kikuyu. I thought three carefully placed small shrubs would have been a better solution, but then I thought the owners of Chatswood House were possibly the sort of people who put 1.5 litre bottles of water on their lawn to deter defecating dogs also.

Makepiece was a terrible disappointment, and I felt I could barely rate it three leafblowers, in my churlishness.

I had been saving Holyoake till last. I presumed this cul-de-sac was named for the illustrious Kiwi Keith, Sir Keith Holyoake, Prime Minister of New Zealand in the years 1960-1972. There is nothing to suggest otherwise. We entered on the left-hand side of the cul-de-sac, noting with some pleasure the grove of mature oak trees planted on a generous island in the center of the street. I hadn’t consulted a map prior to visiting Holyoake, so was surprised to see it take a dog leg turn to the right. Immediately I was enchanted. It looked like a proper neighbourhood. The cul-de-sac sweeps down, and is backed by a bush vista thanks to the generous plantings in the Chelsea Heritage Park. I spotted a house which I thought was likely an original cottage from the late nineteenth century. It stood out amongst the undistinguished other residences of the cul-de-sac.

I noted a couple enjoying a beverage on their second-storey balcony as they surveyed the street; a man waved a cheery greeting. At the bottom of the cul-de-sac there were bad poems chalked by children on the road, and a woman perched on a stool in the middle of the footpath engaging in a spot of plein-air doodling. I couldn’t ascertain the exact subject of her ministrations, but I presumed it was the imposing double-storey brick and tile with moorish arches, mullioned windows, faux half-timbering, and fancy wrought iron balcony railings she was attempting to render. As I watched a young tui enjoying himself in a bottlebrush, an adult tui swooped in and hit the young-un with a THWOCK that made me wince.

Leaving Holyoake I felt suffused with a warm glow that saving Holyoake till last meant I could finish on a high and award the final cul-de-sac a solid five leaf-blowers. To celebrate, we decided to take the long way home, browsing the oddities of Porritt and Chelsea View along the way, because we will probably never walk these streets again. We looped up Porritt and swerved left into Chelsea View. I was puzzled to see a tidy wooden fence with nails driven into the top, and thin string strung tightly from nail to nail. I wondered aloud if it was some sort of string line for building, as I am far too acquainted with such things, but then Simon pointed out that it was in fact an unkind way of stopping small birds from sitting on the fence. This had obviously caught on around the neighbourhood, as flushed with the success of sparrow thwarting, the originator of this dastardly design had shared it with his other similarly anally retentive neighbours. What is more unattractive, the occasional splash of bird faeces, or trip wires on top of your fence?

We came to my favourite part of the walk, which is a rock garden containing a carefully placed herd of plastic cows, sheep, deer, and goats. I don’t know if this is a permanent garden feature, or just an antidote to the endless windows filled with stuffed bears. The owner of the property is obviously a cautious and consistent gardener because their garden contains only red toned plants. The plastic animal diorama is pleasing enough that I chose to illustrate part 4 of Every Cul-de-sac in Chatswood with a considered snap of the rock garden. 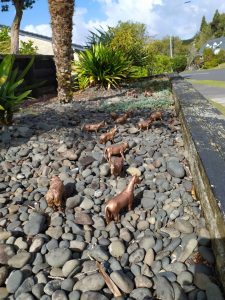 Continuing on Chelsea View we passed Portsea; to my astonishment I noted that outside the house on the corner, the man was still avidly waterblasting his shrubbery, ignoring all warnings from the council to not waste water on frivolous activities. I also noticed the burgeoning mounds of dog-shit infesting Chatswood, much of it smeared into skidmarks by joggers and scooterlings. Dodging the increasing crowds of strollers littering the footpaths whilst gabbling into their phones and simultaneously failing to social distance to my exacting needs we raced for the comparative safety of home. My house-painting neighbour now seems to have a double bubble comprised of tradespeople and other people’s children, but I really can’t care. Mission accomplished.

May we never live through such uninteresting times again.