Every cul-de-sac in Chatswood, or, doing the hard yards so you don’t have to.

Despite my initial assertions that the cul-de-sacs of Chatswood were off-bounds for the lockdown duration, I’ve decided to relax my embargo, and embark on a project to walk every cul-de-sac in Chatswood. The rules must be developed as we trudge the leafy streets; no loud conversation, no making a spectacle of oneself by staring imprudently into mullioned windows, and absolutely no straying into shared driveways, or peeping over fences. I think if these restrictions are observed we can probably avoid unwanted police attention during lockdown. Should a curtain twitcher call the law on me, I’m sufficiently inculcated into the middle classes to feign polite regret, even if my inner bogan is threatening to release itself.

We start by turning right at the top of our long and winding right-of-way, and head in the direction of the naval base. I’m not about to debate the wisdom of locating a munitions dump in suburban North Shore, but I have it on good authority from a retired naval officer that our house is not in the blast zone, though the primary school is. At any rate, there are some very fine cul-de-sacs to be explored at the top of Chatswood on the right hand side of Onetaunga Rd., just past the naval base, so it’s in this direction we head.

The roads are empty of cars, but full of pedestrians as it’s Good Friday, and there is nowhere for people to drive to, unless it’s to their job at the hospital. I find the wide-ranging pedestrians all over the road a bit stressful, so it’s a relief to enter the salubrious confines of Bragato. And salubrious it is! The entire cul-de-sac is paved in dull red hexagonal paving stones, which immediately marks it out as superior to the lesser cul-de-sacs which are merely sealed with asphalt. It feels exclusionary, but I gird my loins and stride forth anyway.

My first impression is of a next level top tier cul-de-sac. There is an overwhelming sense of well-fed well-being in Bragato. I’m confident that the kitchens of these 1970’s faux-colonials and mock- Tudors have baking station pull out bins full of high-grade flour, and plaited ropes of garlic festooning the half- Spanish white painted walls. I choke back my resentment in the interests of observation, and keep strolling nonchalantly, past large double-storey Tudor style monstrosities, and the substantial neo-colonials. All the houses are white, with contrasting fake shutters, and/or pretend half-timbering. I note the tiled rooves are authentic, as opposed to Decramastic, so I’m obliged to award extra points for that. 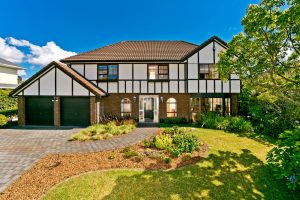 I’m confronted with an astounding sight as we stroll towards the bottom of the cul-de-sac where a pedestrian cut-through to our next cul-de-sac, Murano, awaits us. We are perfectly reflected in a huge mullioned mirror glass feature window plonked incongruously into the back wall of an over-sized manse at the turning end of the street. I say the back wall, because the views from these cul-de-sacs are very desirable, looking out over the Chatswood reserve, and towards the city. I’m confident the designer of this vast excrescence chose to face the front of the house in this direction. It serves to remind me that a bright red t-shirt is not the best garment of choice for low-profile cul-de-sac skulking, and that I should wear a lower-key colour in future.

But I digress. Skirting down the fence-line into Murano, I initially note more of the same, but with a proliferation of dark clinker brick. Top house of note is an early eighties flat-roofed plaster-clad dwelling sporting an ill-considered bay window that I imagine leaks like a bastard. I wouldn’t be surprised if Tubbs and Crockett were relaxing Miami Vice style out the back by the pool, wiping their perforated septums on the backs of their hands and knocking back wine coolers.

Temporarily breaking free of the cul-de-sac oubliette, we turn right into ChelseaView Drive, and cut across into Ravenstone, a cul-de-sac I’ve been eagerly anticipating. I’m not disappointed, but I suspect the developers of this gem amongst cul-de-sacs initially gave the would-be purchasers a choice between two styles of home, unsurprisingly, the mock Tudor, or alternately, the neo colonial. To set them apart from other lesser cul-de-sacs, they are built at twice the square meterage, which means a vista of tiled roofs as far as you can see. Some have diamond-shaped mullioned windows, and there is one extraordinary example of a grandiose mock Tudor at the bottom of the cul-de-sac, which has black-stained brackets tacked onto the soffits of the ground floor that we are expected to believe are beams holding up the floor of the top storey. They don’t. It also sports a double height dormer, diamond mullioned, with a sharply pointed copper roofline. What goes on in Elizabethan England should stay in Elizabethan England. The smartest home renovation move I can apprehend in this cul-de-sac- of dreams goes to the canny home-owner who has disguised the mock-Tudorness of his castle by painting it entirely brown, thereby tricking the eye into no longer fixating on the fake half-timbering. It’s a masterful stroke. Even the birds in this street are predominantly English, a smattering of slimmed-down sparrows fending for themselves now all the cafes are closed, and a female blackbird. A lone fantail hightails it, much like us.

We backtrack up ChelseaView, taking in a couple of flatlands cul-de-sacs as we wend our way homeward. Mosman and Homewood are lesser cul-de-sacs, Homewood notable for having a desultory reserve on the corner, sloped, so no good for sporting activities, and mainly treeless, so inadequate for teenage drinking and trysts. Altogether a disappointment, though I liked the brown clinker brick bollards linked with chains that one house sports as a barrier between cul-de-sac and lawn. Net curtains proliferate in these cul-de-sacs, behind mullioned windows, which I find anxiety-inducing. I have a sense of being watched. As we race up Chelsea View I note a house I had observed as previously using vehicles as barriers to unwanted visitors have now strung bits of tape back and forth across their driveway as a nod to a more formal exclusion. I suspect it is the innards of the Fleetwood Mac tape they were listening to the other day, when I wandered past, and noticed some evidence of mid-week day-time drinking, and a stuffed bear, face down on the driveway. I assumed the bear had been drop-kicked off the balcony. An over-sized stuffed bat is now the stuffed toy du jour, leering down at small children from above.

As I have chosen a rating system of leaf blowers, I am awarding a solid 4 and ½ leaf blowers to these cul-de-sacs, based on an average across all the cul-de-sacs visited.

Tomorrow we take on Portsea!

2 thoughts on “Every cul-de-sac in Chatswood. Part 1”