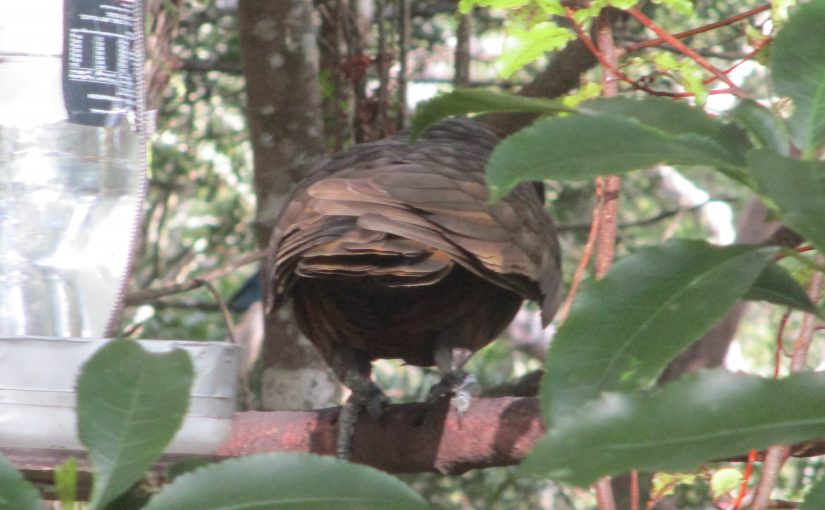 In which the Intrepid & Fearless Buckbeak stands his ground against the relentless attempts at Intimidation and Harassment by Captain Arsehat.
Buckbeak is in fact a boy, not a girl. Rube mistake by rank amateurs. 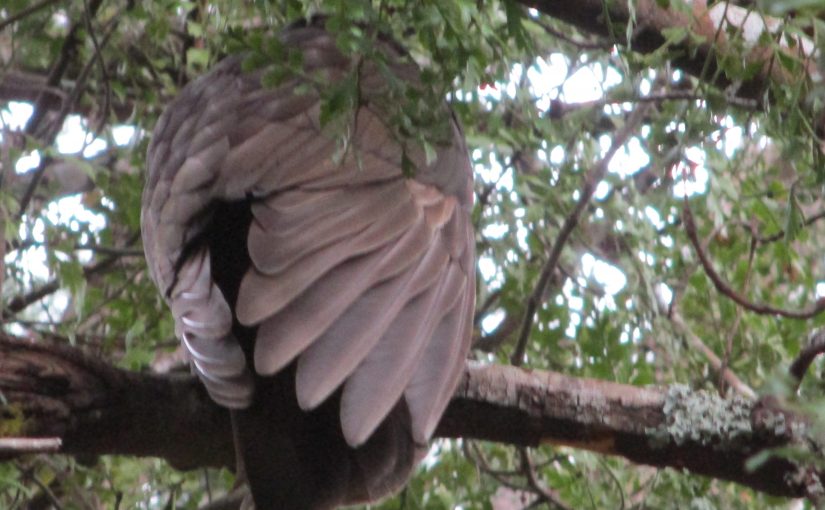 The first time we saw the kākā was in late Autumn of 2020. It was just on dusk post lock-down and we were wending our way down our driveway after visiting our local night market.

He was a high dark mark on the sky above us, distinguishable only by his joyous prehistoric skraarking. We jumped up and down screaming with sympathetic delight, because that is the effect kākā have when you realise they are in your suburban Auckland neighbourhood.

Kākā have been spreading out across the Auckland isthmus for a few years now, charming, charismatic winter visitors to bush-clad suburbs. The Auckland kākā belong to a flock originating from Hauturu Little Barrier Island in the Hauraki Gulf, who after breeding migrate further afield to forage before returning to their island haunts in early spring to breed. .

It was a few weeks until he finally arrived in our backyard, a flurry of tui in his wake. He sat in the kanuka alongside our deck, fluting and cackling, and I rang my Dad, and held the phone out towards the tree so he could hear. I was gabbling with excitement.

One morning when I was lounging in bed I saw him land on the deck outside the window to investigate some apple left out for the waxeyes. I watched him delicately grasp a piece of fruit with his zygodactyl foot. He discarded it as beneath his dignity; apparently kākā have the exalted tastebuds of Roman emperors and only a platter of persimmons and peeled grapes will suffice for these patrician parrots. There are no luxury fruits available in the bush gully behind our house though; I think the kaka are attracted by the tall old-growth kanuka and tanekaha that provide an outlook, as well as sap to suck, and grubs to winkle. Kākā are adept at bark stripping kanuka in order to fossick out food.

The first time we had a truly close-up encounter with the kākā we had christened Randolph was when he suddenly landed in the tree outside my workshop and insouciantly climbed down using his leatherman beak and feet as grappling hooks before positioning himself on a slim branch perch to investigate the tui feeder. An agitation of swirling tui whirred and clicked in dismay as Randolph grabbed their drink container and gently tilted it, releasing a steady stream of liquid, much to their consternation.

We immediately observed that Randolph was a handsome bird, khaki/brown, a silver fox slick-down of whitish-grey feathers atop his head, a blush of copper on his cheeks, a flourish of brass behind his dark eyes, and a huge hooked slate-coloured beak. His impressive scaly talons grasped the branch and the container, and we had a brief flash of his red pantaloons.
We don’t actually know if Randolph is a male or a female, because we haven’t seen him side by side with another kākā of a different sex. There is some sexual dimorphism in kākā, the females are slightly smaller, and the males heads and upper beaks are considerably larger.

Kākā are ‘deep endemics’ from the family Strigopoidea, an ancient group that split off from all other parrots millions of years ago. Kākā belong to the genus Nestor, along with the kea, and two extinct kākā, the Chatham Island kākā, and the Norfolk Island kākā. They have a close relative in the kakapo. I keep reading that kākā and kea species are claimed to be ‘primitive’ on the basis of their early departure from other parrot species, but really it means they are the most basal clade of parrots, taxonomically speaking. In simple terms this means because of the break up of Gondwanaland, they are a direct descendant of a proto-parrot, without the variety of divergence you see occurring in other parrot species. They are more distinct from all the other parrots than all the other parrots are from each other.
However, because kākā and their fellow NZ parrots have adapted and specialised to the unique environment of the isolated islands they inhabit over a long time period, they are unlikely to have a close resemblance to their proto-parrot ancestor. That’s enough of the dry science for now though.

I took to keeping a diary of his visits. September was a busy month for backyard kākā sightings. He came almost every day, the earliest visit at 3.09 am, on Sept. 21, when he fluted intermittently through the early hours of the morning.

As I sleep lightly, I was able to keep track of when I heard his alarm clock fluting. A diary entry from Tuesday Sept. 15 reads :

5.58am- a joyous cackling skraak, & light fluting to the South

Other diary entries describe ‘exuberant clowning in the canopy’, and yet another says ‘Yesterday he flew past the ranch slider at low altitude – let loose a loud startling skraak which caused screams of fright – 1pm.’
Saturday Sept. 19 says 5.46am- a flurry of cackling skraaks to the south followed by querulous fluting. #skraakflutetseep.

There is a little ballpoint pen sketch of a kaka head adorning the page.

I developed a vocabulary of kaka sounds; skraaking, fluting (light, diminishing, or querulous), tseep-tseeping, cackle-hissing, gurgle-growling, gurgle-cackling, snarl-skraaking, and the curious WEE-do, which is almost an electronic noise. I recorded his chatter obsessively, and made videos of his visits. Randolph was unperturbed by the distraction he caused, and not alarmed by our interest in him. One exciting day Randolph had a friend fly in for a chatter. I have a recording of this event in which we are heard to exclaim excitedly “There’s two of them, TWO of them!”

A diary entry on Wednesday Sept. 23 states 8.30am- a kākā flew South past the bedroom window followed immediately by two large kākā who flew from the South & then wheeled down into the gully. No skraaking- a couple of light flutes.
We worry about humans imprinting on wild animals, but I think the urban kākā imprint on humans.

Often Randolph’s visits were heralded by a pertubation of tui. I would glance out my workshop window and see an agitation formenting in the tall trees outside, tui blasting in from all directions and positioning themselves like spectators in a Roman ampitheatre. More often than not he would blithely ignore them, as he perched quietly high in a tree, calmly ring-barking small branches, his presence betrayed by seeds and bits of bark dropping to the ground from his ministrations. If he hopped down to investigate the tui feeder he was rewarded by messerschmitt attacks as tui took turns to swoop at him, executing last moment swerves.

When that became tiresome he would suddenly turn tail and freewheel down the gully flashing his brilliant red underthings, and skraaaking with mirth.

Kākā are omnivorous birds, with a diet consisting of fruit, berries, flowers, nuts, seeds, nectar, and small invertebrates and their larvae. They have long slender upper beaks for tearing bark, as well as brush-tipped tongues for sap-licking and nectar extraction. Their zygodactyl feet, meaning two toes forward and two toes backward, also give them the advantage of the equivalent of two opposable thumbs on each foot which are the perfect tools for grasping and climbing.

The combination of being a powerful flier and having a varied diet is that kākā can forage afar as various foods come into season. We note that Randolph disappears as soon as the kowhai start blooming in early Spring, and I start to see posts appearing on social media of kākā enjoying the yellow blossoms all over Auckland.

On one occasion a tui thwocked into my workshop window, a very uncommon occurrence, as they are accomplished fliers, whirring and gliding over and around the house frequently. He had knocked himself out cold, so I called Simon down to tend to him. As Simon bent over the tui, Randolph plonked suddenly down onto the branch above Simon’s head, curiously craning to see what was going on. I dislike anthropomorphising, but I had observed what appeared to be a reasonably good-natured chase going on earlier, tui beak to kākā butt and vice versa tearing at speed past the house, and wondered if the tui was an inadvertent victim of the game. The tui was fine after a few minutes quiet time in a cardboard box, and I doubt parrots feel much remorse.

It’s all fun and games till someone smashes into a window pane.

From Sunday Sept. 27 there are no kākā sightings recorded in my diary, just an sad little entry that says ‘The long silence 🙁 Have the kākā returned to Little Barrier?’
They returned for a brief visit in early October, but breeding season was in full swing on their Hauraki Gulf island strongholds, so we had no expectation of seeing them till winter of 2021.

Kākā have very specific requirements with regard to a suitable breeding nest. They prefer cavities in large old forest trees, at least 5 metres above the ground which they line with wood chips. The female lays a clutch of about four eggs which she incubates solely, and the male kākā brings her food.

Kākā evolved and adapted in an environment without mammalian predators, and under those conditions, being a cavity nesting Nestor was a good solution. Unfortunately the introduction of predator species has been disastrous.

The worst indicators for kākā success are the presence of stoats and possums.

From the time the eggs are laid till the time the chicks can fly is three to four months, which is a very long time for the female kākā to be vulnerable to predation. The high ratio of male birds to female birds is stark evidence that predator control is essential for kākā to flourish. Likewise, fledglings often fledge before they can fly or climb, so spend some time on the forest floor before being able to find safety in the treetops. This makes predator control of cats, stoats, and rats vital to ensure their survival.

Predator control has been proven to work in favour of kākā. The Pureora Forest Park in central North Island is a case in point; a fourfold increase in kākā in 20 years, from 640 in 2000 to 2600 in 2020. Even more exciting, the ratio of females to males has improved dramatically from 1:2.1 to almost 1:1! This is very promising for future population growth.

Kākā are still regarded as under threat though.

If kākā are visiting in your neighbourhood, or a suburb nearby, the most efficacious things you can do to encourage them and make their environment safe is to trap assiduously for rats, mustelids, and possums, and plant the native trees they love for food and habitat. Most areas in New Zealand have volunteer groups that trap, weed, and plant. Every effort helps, no matter how small it may seem.

Randolph and friends reappeared this year, earlier than last year, but they also departed earlier. I haven’t heard or seen a kākā since September 20 when Randolph dropped in for a raucous chat. I’m hoping they appear for one final visit, but if not, I’m confident of their return in winter of 2022.