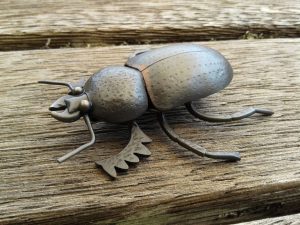 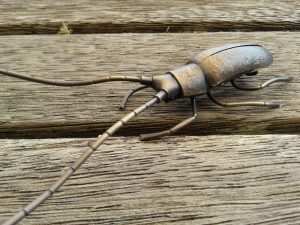 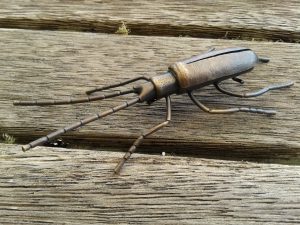 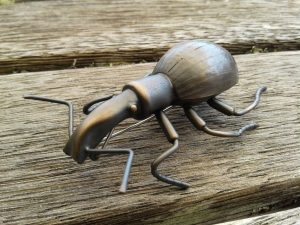 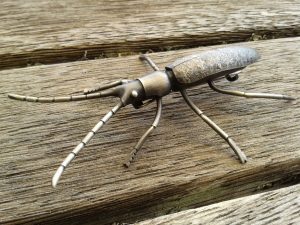 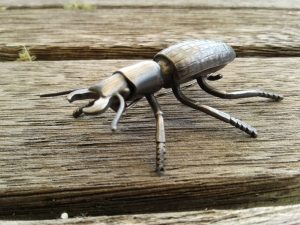 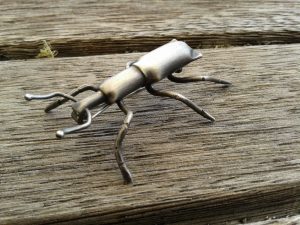 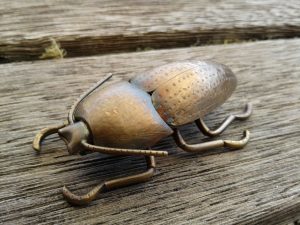 The tree weta is guaranteed to evoke a strong response in most people who encounter them. They have barbed legs, overlapping amourmed plates on their backs, fierce mandibles, ovipositers that resemble large stingers, and an ability to jump a considerable distance. When threatened they will throw their back legs over their heads in attempt to intimidate their foe by looking larger and spiky, and make a rasping noise by rubbing their legs against their abdomen. The males have a particularly fearsome visage, in the form of an over-sized head which resembles a horse’s, and will also hiss menacingly. In reality, they are mostly harmless, and can make an interesting if undomesticated pet if a weta box is provided as a residence. 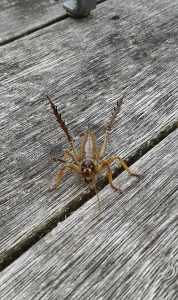 Left to their own devices they live in holes in trees, called galleries. The holes are formed by moth or beetle larvae, or rotted off twigs. A gallery will consist of maybe ten weta, juveniles of mixed sex, females, and one male who rules the harem. The male with the largest head reigns supreme, and it takes three instars to reach maximum head size. Males with smaller heads can mate with females outside the harem, but can also mate with the females of a harem if the dominant males head becomes too large to fit into the gallery entrance!

They are nocturnal, and aboreal, as their name suggests. They feast on soft leaves as a preference, and small insects. They provide a tasty snack for many of our native birds, kiwi, robin, ruru, and tomtit, but are also predated on by the usual introduced predator suspects; rodents, mustelids, hedgehogs, and cats. 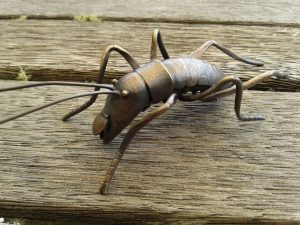 The mumutawa beetle is a sturdy beetle, with an impervious looking carapace and torso, and chunky legs adapted for digging, and rowing through sand. It’s the largest of New Zealand’s native scarab beetles, and is found throughout coastal NZ, above the high tide mark, though it requires a lot of dampness to stop it dehydrating and dying. A nocturnal beetle, it emerges of an evening to fly and wander about in a blundering fashion, on the lookout for food and likely mating partners. The traces of their nocturnal ramblings can be observed in the sand trails they leave behind them. 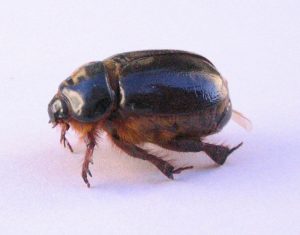 The female beetle lays her eggs deep in the sand; larvae have been found living more than a meter underground, feasting on the roots of marram grass. They have a tendency to be parasited on by an exotic wasp in Northland, which stings, paralyses, and lays eggs in the hapless larvae. The eggs hatch, and the wasp larvae feast on the mumutawa larvae.

The beetle larvae have been seen perambulating down to the low tide mark at night to cover themselves in salt water. It is posited that this may kill some parasitic mites.

The Pericoptus truncatus was the first beetle collected in New Zealand by Joseph Banks in 1769. 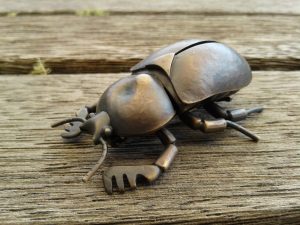