Before I regale you with my latest flaneuring exploits, I have to make an astonishing confession.

Portsea and Fitzpatrick are culs-de-sac off ChelseaView, not Porritt. Unbeknownst to me, Porritt circles back on itself, running from Mokoia to loop around and re-appear near the top of ChelseaView. I discovered this when I looked at a map, for the necessary purpose of setting firm boundaries for my culs-de-sacking project. I feel a little foolish, but I felt I needed to clarify, in case any of you thought ‘Hang on a mo’, this doesn’t ring true!’, and took it upon yourselves to doublecheck, and reveal me to be mendacious, or at very least loose with the truth. I shall be wearing my compass watch on future rambles, so as not to make any further cartographic slip-ups. 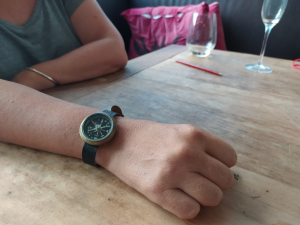 If we can analogise the western suburbs of the inner North Shore to a corporeal being, and I think we can, Beachaven and Birkdale are best described as the roiling guts, whilst Chatswood is the skull. Porritt is the looping dura mater of the brain, and the many culs-de-sac within are the neural pathways. Unfortunately there is only one functioning synapse between the culs-de-sac, a modest public cut-through that set me on my initial path, to visit and report on every cul-de-sac in Chatswood. Today we are not heading into the brain of Chatswood, however, we are visiting two of the culs-de-sac on the western side of Porritt.

We head up to the top of our long and winding right-of-way. The first interesting thing I see is a handsome tabby sporting a white fur pinafore sitting a foot from me on the retaining wall pretending to be invisible. I don’t really see him till I’ve passed a foot or so by him, so I turn and stare into his horrified golden eyes and say ‘Hello!’, which prompts him to lauch skywards off the wall and sprint for the nearby safety of the underside of someone’s stationary car. I guess I broke his bubble.. To my relief, I note my house-painting neighbour is no longer wallowing in Fleetwood Mac, as Tom Petty has taken over as music du jour. I approve.

We turn left, and head towards Mokoia, and after trotting up Mokoia, turn left again into ChelseaView, veer into Porritt, and head down into Barlow, the first cul-de-sac. In order to be as unobtrusive as possible, I’ve made a rule that we perambulate around the cul-de-sac, glancing furtively at the houses on the opposite side of the street, so as not to rouse the ire of the inhabitants. I have to keep hissing at Simon to keep him on track with the rules. He has a tendency to stop, wave his arms about expansively, pointing out frightful features with laser precision. He sulks for two seconds, and then exclaims loudly at a pair of fancy gates with an inset of off-the-peg wrought iron pretend heraldry picked out in some class of ormolu.

The most curious architectural feature I spot immediately is red Decramastic tiles unwisely used as external wall cladding, paired with fancy plaster renderings painted a fleshy terracotta pink. I can’t quite put my finger on the culture this has been egregiously misappropriated from; I think it’s sort of Grexican, or maybe Mexalian. Many of the houses in this cul-de-sac are hidden behind tall fences or exactingly manicured hedging, for privacy, or out of shame. We can only speculate. All that is visible in most cases is an endless sea of of low-slung tiling, often decramastic, occasionally authentic. I have to reiterate my no peeking over fences rule to Simon, AGAIN. At any rate, it turns my attention to the other sort of house in the cul-de-sac, the late 1960’s weatherboard bungalow, with large street-facing windows, a pleasing two-plane iron roof, with the occasional splash of an amber beer-bottle-base patterned glass feature window adjacent to the welcoming front door. What’s not to like?

Well, let me tell you. Regretfully these once modest bungalows have been pimped, primped, and preened to within an inch of their former lives. They are the width and depth of the sections they sit on , bar the requisite space for a lap pool at the landscaped rear, and an acre of concrete out front. ‘Semi-permeable’ is not part of the vocabulary. They’ve been face-lifted, trimmed, and tucked so high they now sport neck-beards.

It’s time to move on to Heaton, the next cul-de-sac. I feel we’ve maybe spent too much time in Barlow, as I broke my dress-code rule, and accidentally wore an attention-attracting bright yellow t-shirt. All some neighbourhood nark needs to do is describe a scuttling woman dressed as a wasp, and I’m screwed. Heaton echoes Barlow, but yet again proves my theory that the best house in the sac is found at the cul. There is a real charmer at the end, dark, hunkered down subtly into it’s west-sloping lawn, with the second storey deck bleeding perfectly into the street-facing front lawn. It’s so delicious I briefly permit myself the fantasy of living there, imagining basking in the afternoon sun, like a leathered saurian, consider not negotiating the long and winding right-of-way with it’s unfriendly cats… But no. I can’t award 5 leafblowers on the basis of this one house. Common-sense dictates a generous 3 and ½..

Leaving Barlow we follow the loop of Porritt up to Mokoia. The residents of one house have clearly been hoarding garlic corms, and they are sauteing them in lashings of butter with no consideration for people who are experiencing garlic shortages. The smell exudes into the street, and I yet again have to curb my resentment, whilst simultaneously salivating like a canine creature in a cruel Pavlovian experiment. Heading westwards down Mokoia in a homewards direction we note a man sporting a bristly white cock-duster atop his upper lip at the wheel of a red alfa-romeo 4c. I surmise he is going to the supermarket, but then he returns, and returns yet again, passing us three times within a few minutes. I guess he got tired of sitting in his garaged vehicle making brrrm brrrm noises. His other car is shit too, a Fiat 124 spider abarth; I’ve seen him tooling around the suburb in freer times. He should get an MX5, like a real hairdresser.

As the other well-known 4c driver would say; happy days.

One thought on “Every Cul-de-sac in Chatswood. Part 3”